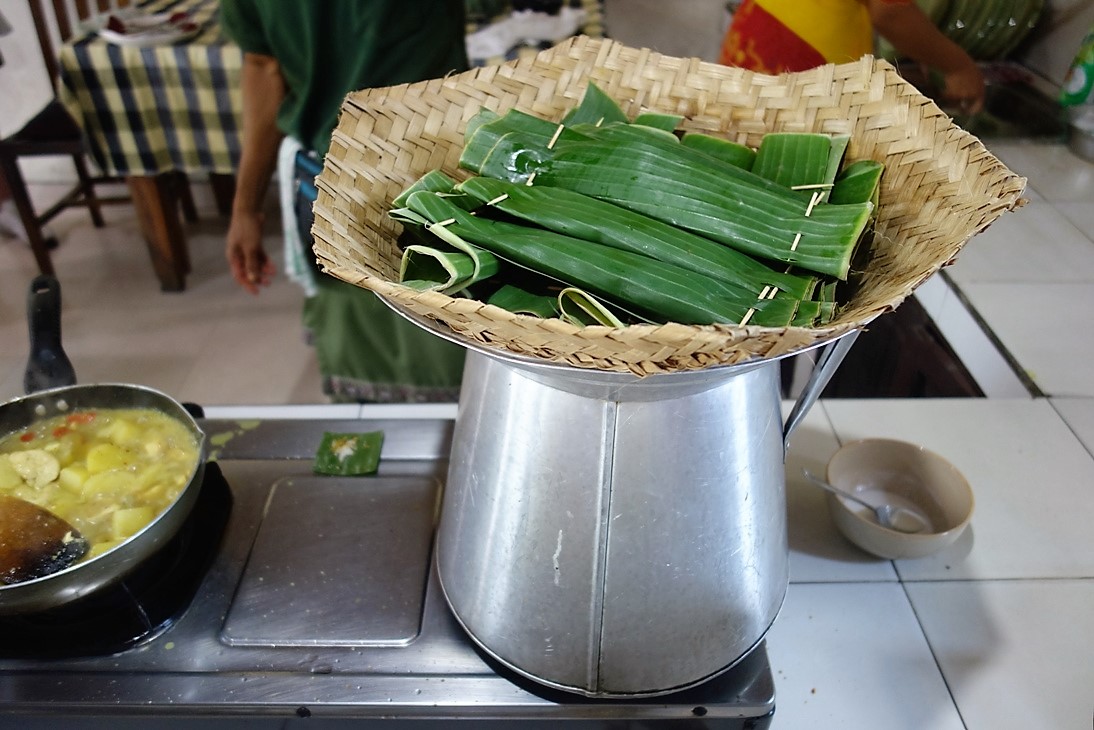 Two weeks ago I’ve embarked on a journey to travel through Southeast Asia. During the next three months the focus of my blog posts will therefore most likely shift from the content you are used due to the upcoming experiences in all the different places I’ll visit, the food I’ll eat and the people I’ll encounter.

Leaving my job of two years, our little city apartment and all winter clothes behind, my boyfriend and I happily began our journey in early October to get to know a completely new culture.

It was our first time in Asia and we had heard many good, but also less nice things about Bali , so we decided to give it a try and see for ourselves. While we definitely agreed on some of the negative aspects of mass tourism, which partly disturbs the natural beauty of this island, we were also happy to find ourselves enjoying the positive side of Bali: Friendly people, beautiful landscapes, a vibrant culture, ancient temples, spirituality all over the place and certainly – amazing food! No matter what we tried during our time in Bali, we were blown away by the variety and intensity of flavors and spices. The food is simply great, which is why we decided to attend a cooking class in a traditional Balinese cooking school. 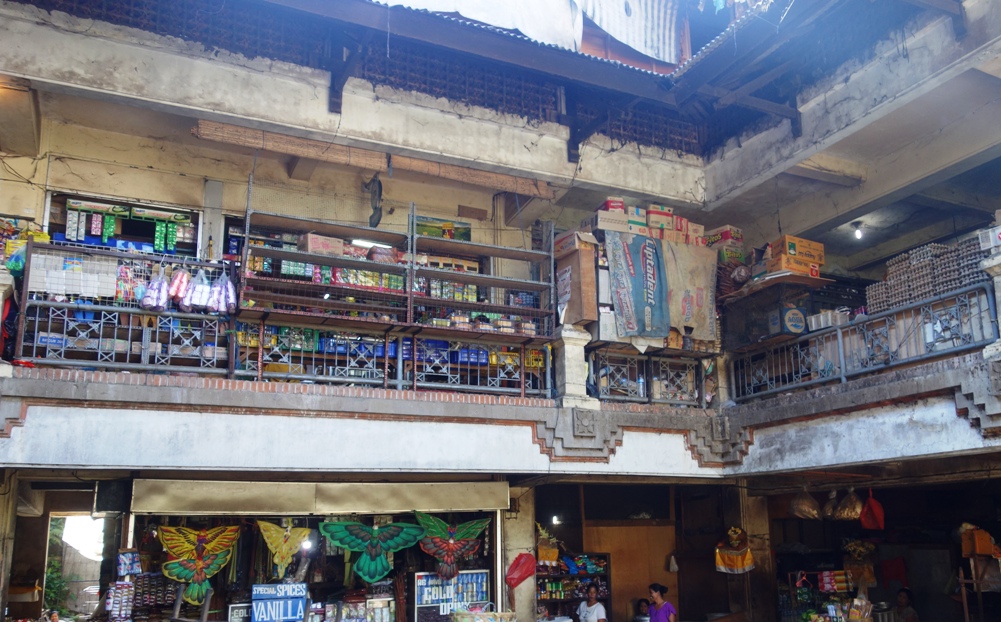 Following recommendations, we chose the Paon Bali Cooking Class very close to Ubud. In the morning, we were picked up at our accommodation and together with the other participants of the cooking class we visited the local market, where our guide Wayan explained the various foods and some facts about the local cuisine. 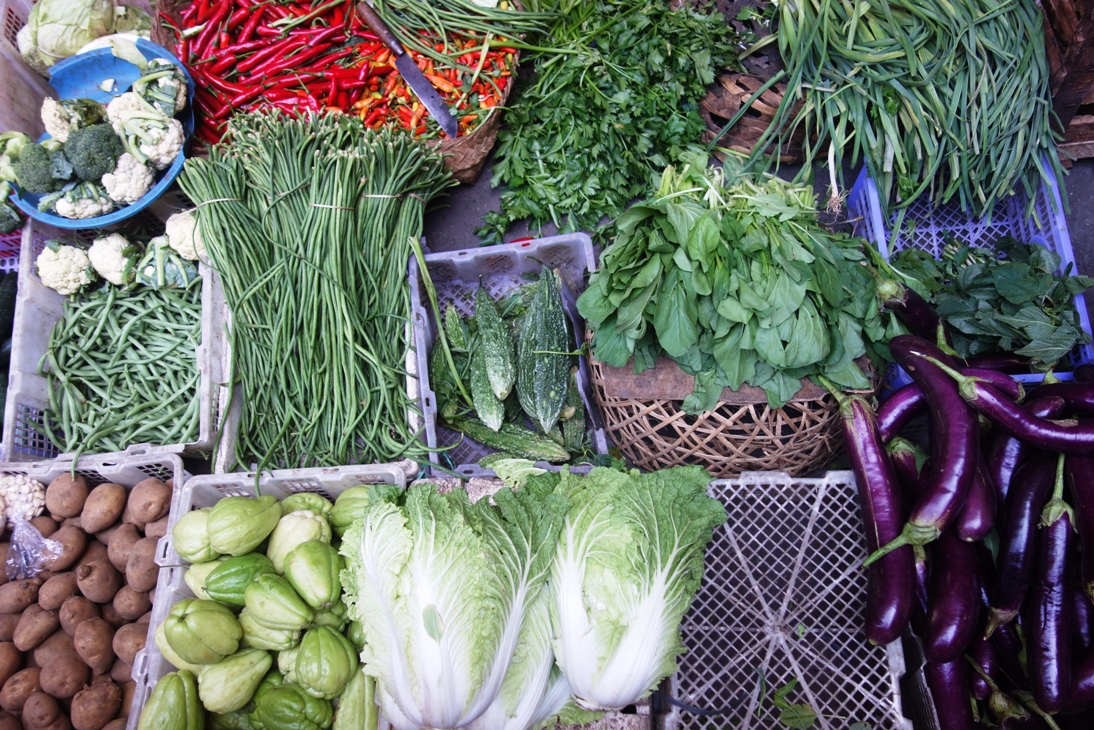 Compared to European markets, the market in Ubud is quite an adventure. Chaos, dirt and smell dominate the atmosphere, while busy flies are circling raw meat and fish in the heat of the late morning. Yummy! On the one hand, a Western tourist can feel quite intrigued by this exotic market with its very characteristic ambience, but on the other hand, we learned that our stomachs are not used to the meat and fish sold there. Those fly-kissed pieces were saved for the locals only, while we were getting some halal food from butchers and fishermen someplace else. However, Wayan also told us that the flies are a sign of quality, since they are only attracted by organic meat and fish. 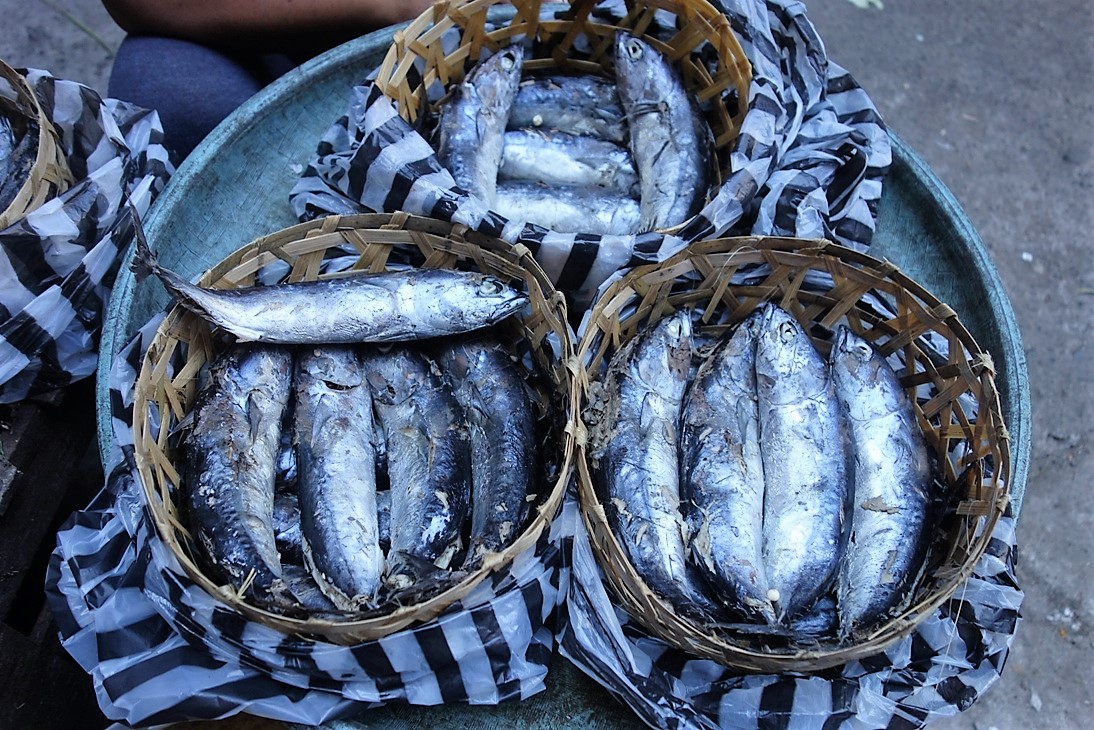 After the market, we stopped at a beautiful rice terrace in the little village Laplapan, where our guide explained the process of growing and harvesting rice. We learned that Balinese people and also other Asian nations eat rice three times a day, which is why these little grains are existential for a lot of the local families. The saying is not in vain: No rice, no life!

In the private house of Wayan and Puspa, the owners of the cooking class, we were greeted by the friendly host, who served us a deliciously refreshing lemon drink, while explaining the structure of the house and raving about his wife, the main cook. We were now ready to board the open kitchen with a beautiful view to the wild jungle of Ubud and learn about the Balinese cuisine.

Upon our arrival, the ingredients were beautifully arranged on colorful plates and we were explained the various dishes that we were about to cook during that day: A mushroom soup, base gede (yellow sauce), chicken curry, minced chicken on bamboo sticks, vegetables in peanut sauce, coconut and snake bean salad, steamed fish in banana leaves, deep fried tempeh in sweet soy sauce and finally boiled banana in palm sugar syrup. Can you feel your taste buds buzzing? 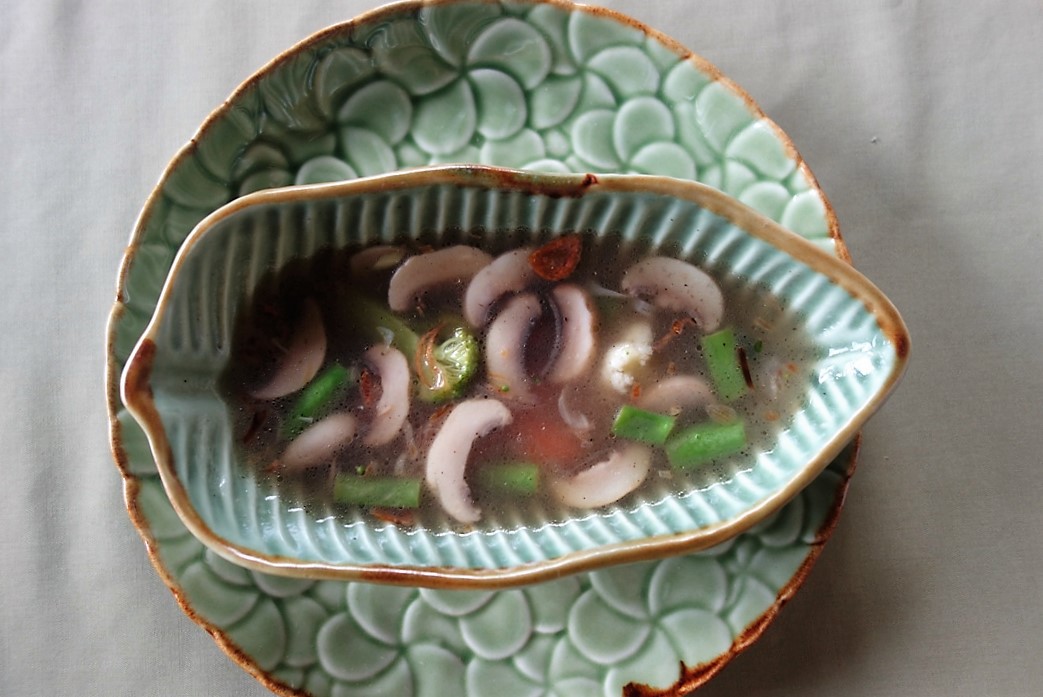 Puspa and her team of lovely Balinese women showed us how to chop, slice and ground the typical ingredients of the local kitchen: Three types of ginger, garlic, coconut, tomatoes, carrots, snake beans, roasted peanuts, turmeric, tempeh, kaffir lime leaves, chili, lemongrass and candle nut. The different aromas filled the air and made our anticipation for the delicious food growing from minute to minute.

But before we could feast on all those delicacies, we learned a lot about the local food culture. In Bali, many dishes are served in a banana leave, which not only makes for a lovely look but especially for a more intense aroma, since the leaves provide a delicate flavor. Similar to that, the typical chicken on bamboo sticks are roasted on a traditional barbecue with coconut charcoals, which also transfer their typical flavor to the meat. 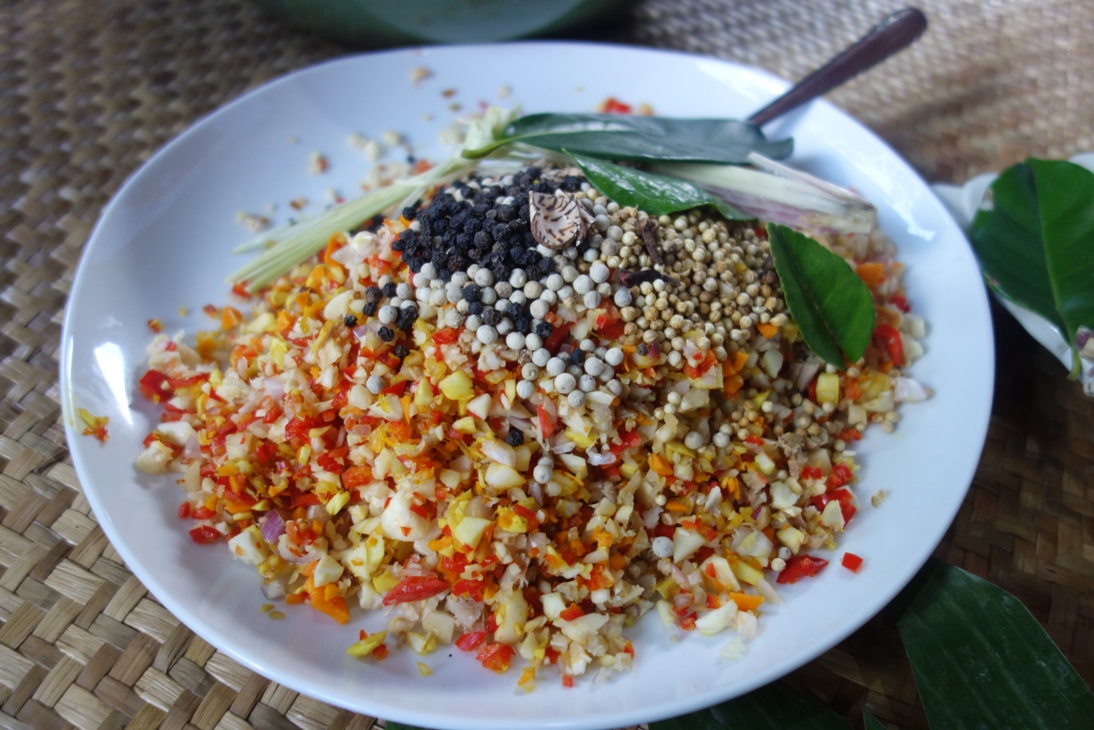 Ingredients for the yellow sauce

Grinding is another very traditional cooking technique in Bali. Instead of using a food processor, the Balinese people grind all the ingredients for the yellow sauce for example, which is used as a base for a variety of dishes, in a giant mortar with a lot of man power. Of course it took the Balinese people only a few minutes to grind the ingredients to a thick paste, while us cooking students only made a very pitiful image working our arms tired with the huge pestle. 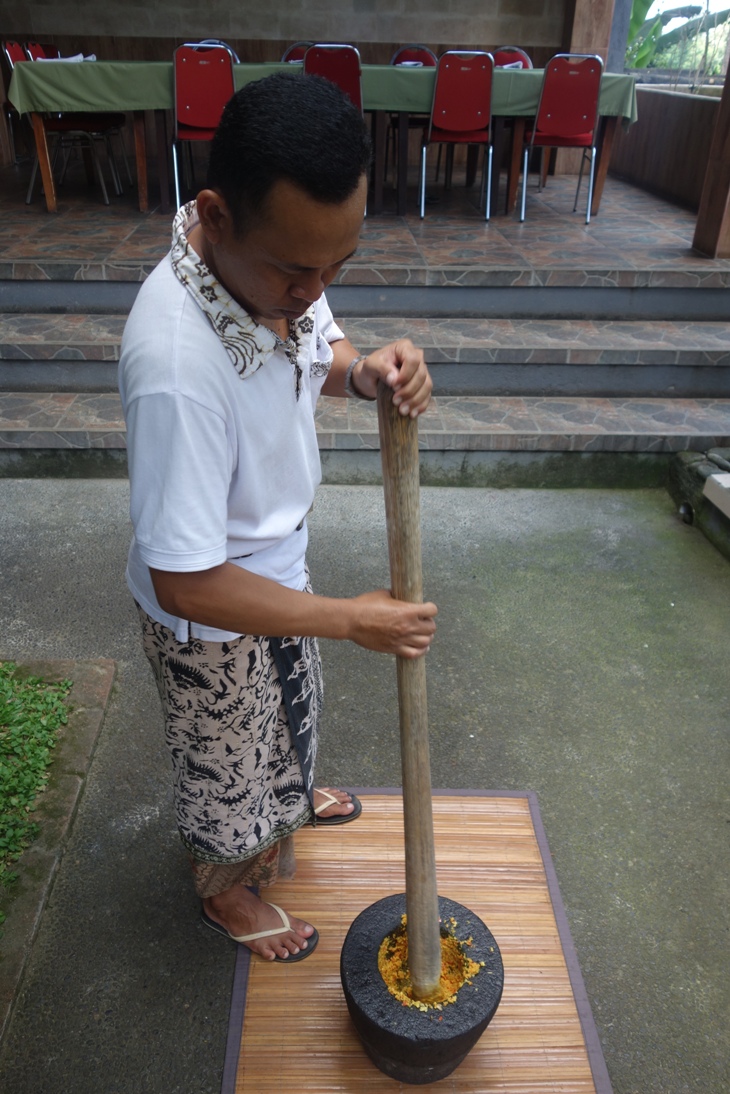 What surprised me the most was how little salt was used in all the dishes compared to all other spices. We happily used a full teaspoon of pepper, coriander and other spices for one single dish, but only a pinch of salt. No wonder the Asian cuisine is famous for its spices.

It was a really fun class, cooking together with people, who were equally interested in food and cooking, and finally being able to sit down and fully enjoy our meals. I think, we did a fairly good job thanks to our amazing instructors. I’m well aware that joining a Balinese family for dinner would probably uncover some completely different and surely very spicy flavors compared to the cooking class, which was still made for tourists. Nevertheless, we enjoyed the unusual cooking methods, new flavors and bubbly conversations during the preparation of the food. Thanks a lot to Puspa, Wayan and their whole team and now let the pictures tell the rest of the story… 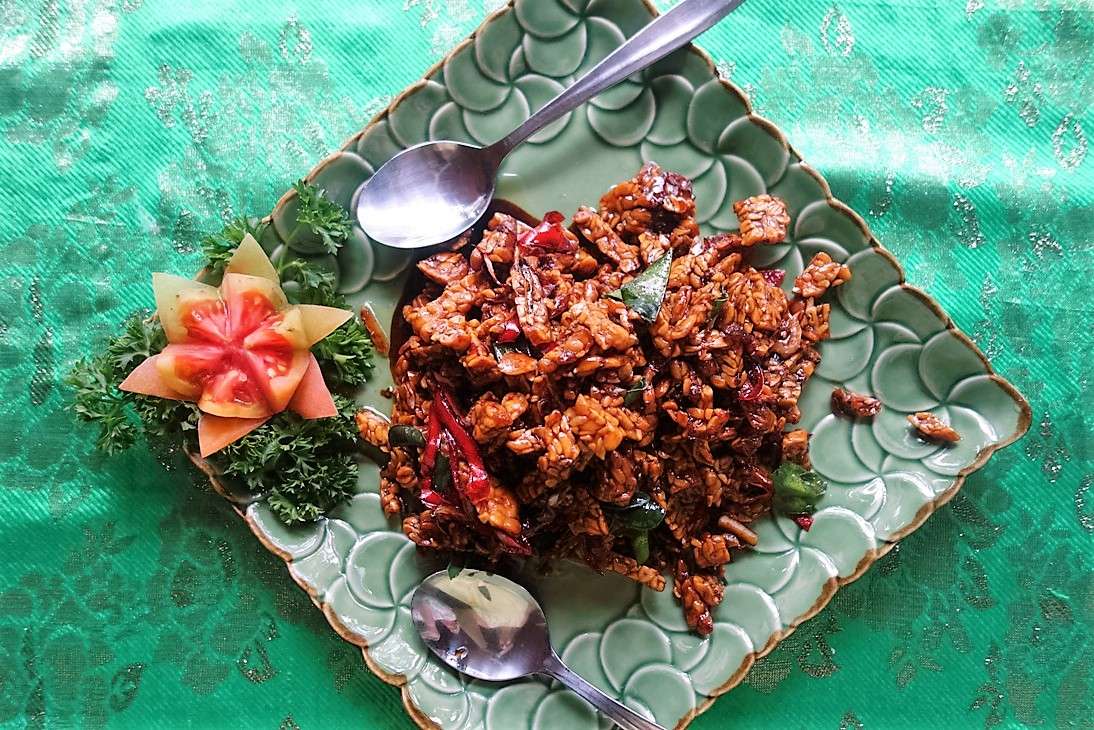 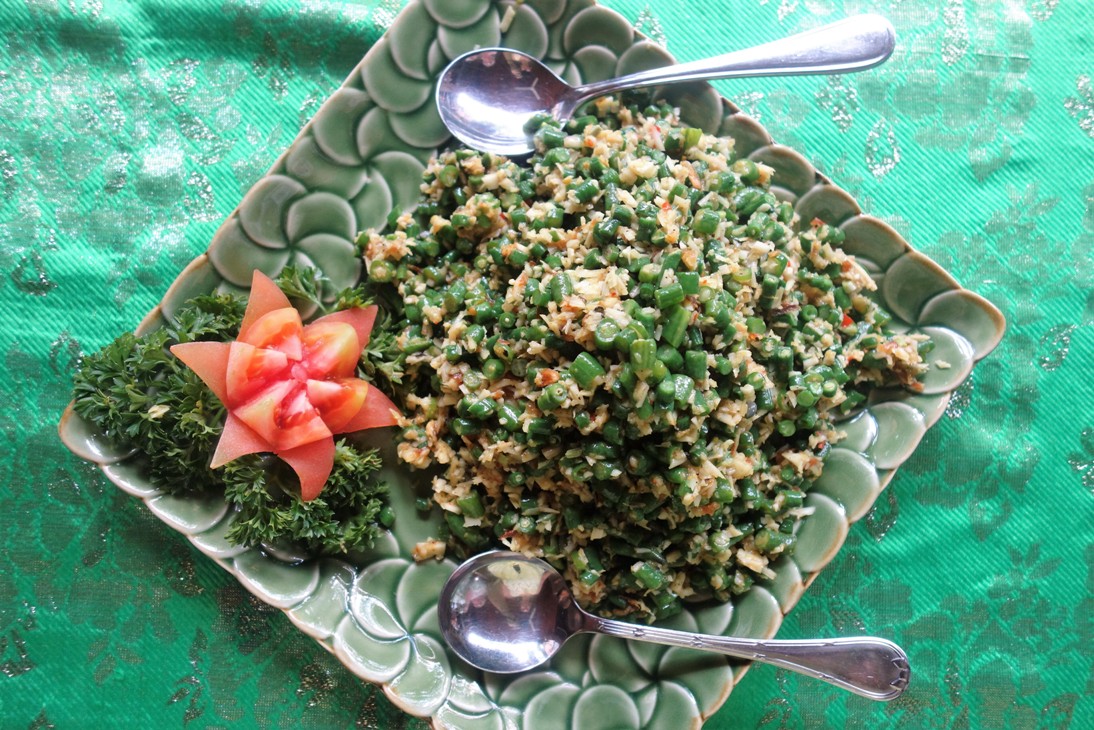 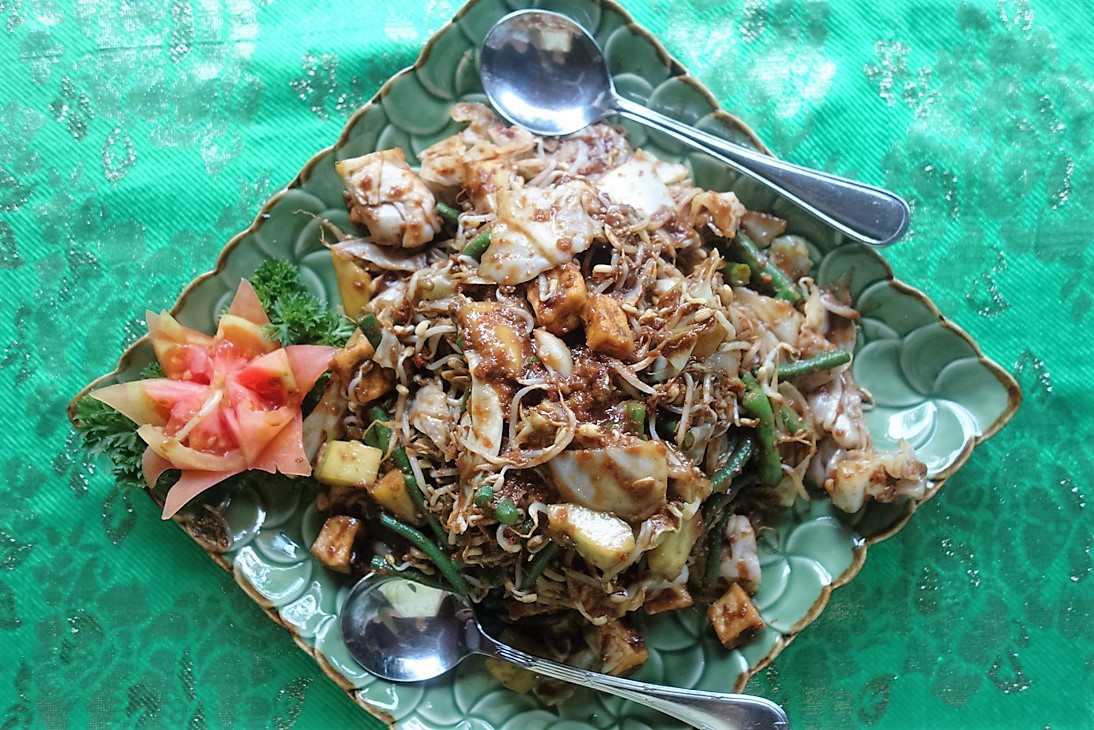 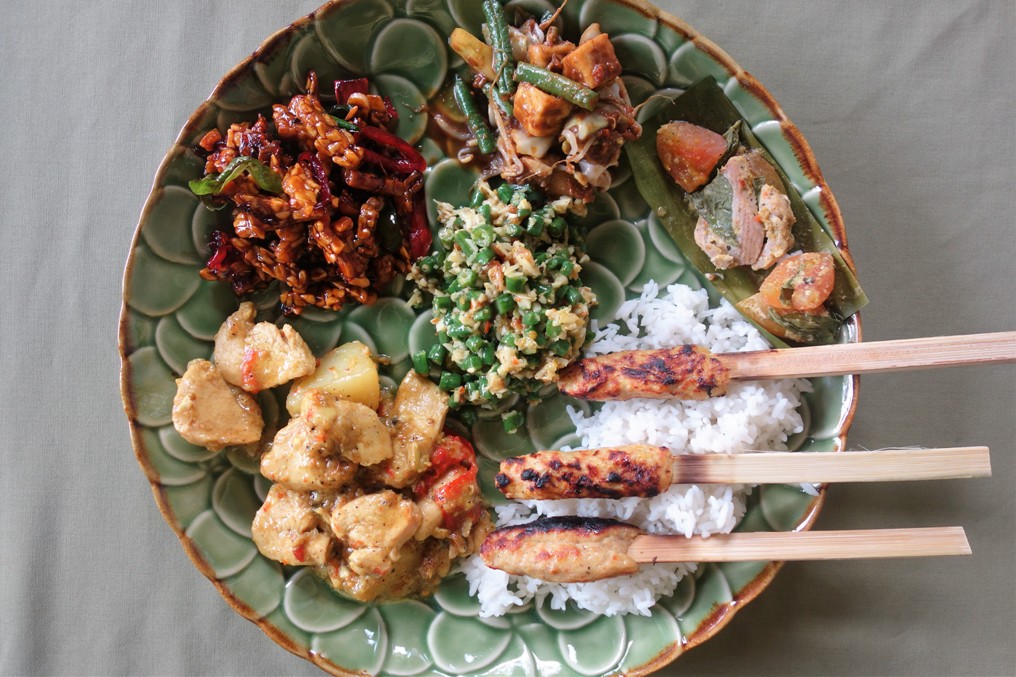